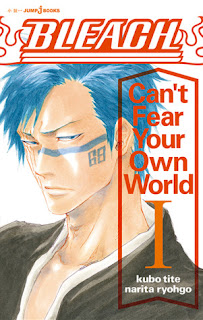 I am more familiar with the anime. I have been meaning to delve into the manga. So, seeing this story in novel format came as a surprise. A nice surprise since I do enjoy novels (obviously).


It has been a year or so since I watched Bleach, so occasionally I had to look up certain names to put a face to them. Some characters, such as Kenpachi, Ichigo, Urahara (aka my favorites) I did not have to do that.


In this format, certain aspects about the world are better explained than the manga or anime could ever do. For example, soul tickets. Also, it is nice to get into certain characters’ heads to get a feel about their emotions and innermost thoughts.


The story in itself is well-written and easy to follow.


I am not familiar with the plot, so I deduce this takes place beyond what I have watched in the anime. It was new material for me.

Posted by Raonaid Luckwell at 5:10 PM No comments:

I am so happy that this manga is continuing in English. I have been reading / buying their manga faithfully since I watched the anime.

Yes, I am the type of person who likes to read the manga and watch the anime. Sometimes an anime will turn me to the manga because I "have" to know what happens next for characters I have connected with.

Yogi is just one of those characters. There is just something about him that makes me like him. He's like a big kid at heart. Also, there is a mysterious air about him. Well, in this volume we learn about Yogi's history. Why the Silver Yogi exists.

Yogi not only finds the key to his past, but who he is, and something most dear to him. 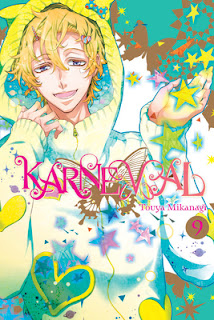 I also own the anime.
It is one of my go-to animes whenever I'm feeling down.
Whenever I read the manga, I always hear their English voice actors.
Yes, I watch both subbed and dubbed. The dub allows me to appreciate the art style.
This is another anime I wish there was a second season!


Posted by Raonaid Luckwell at 11:49 AM No comments:


I generally do not review manga. However, I thought this would be a nice change-of-pace for me.

I am a fan of both the manga and anime. The anime’s ending convinced me to start the manga – which I am so glad I did. So, when I saw Netgalley offered a chance to read and review the newest volume, I jumped at the chance.

I like seeing into the shared past of Yona, Hak and Su-won. The scenes really shows the bonds the three had as children. Also, how Yona and Hak continue to puzzle over Su-won’s betrayal.  A familiar face arrives, one Yona nor Hak thought never to see again.

I am insanely curious to see how Yona and Hak’s relationship evolve. I am so invested on seeing them as a couple. It is always a treat seeing their development. This volume did not disappoint on that score.

There is a sense that something is about to happen… for good or worse, is still the ultimate question.

I adore the art. The scenes are done in such vivid detail.  Even this far in, the art style has not changed which I like.

I cannot wait for Volume 25. Oh the anticipation! To see what will happen between Xing and Kouka. 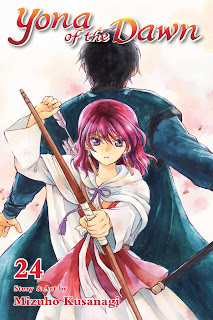 It is a shame the anime did not get a Second Season. There is enough material to make it so. There are some characters I could see come alive in animation.

Posted by Raonaid Luckwell at 5:38 PM No comments:

Keeley Smythe is a blacksmith. She saves a mysterious boy from murderous soldiers. When centaurs come to her aid, Keeley learns that prophecy named her and her younger sister the next queen of the Black Hills. However, the Old King’s sons plan to prevent either from claiming the throne. Treachery forces Keeley to take her new title seriously. Will Keeley be able to protect her family from the princes? Can she make the necessary alliances in order to secure her throne?

Keeley is not your typical heroine. I love the fact that she is tall and muscular, quite different from small and petite women that is often found in the romance genre. I adore Keeley’s attitude towards things. She does not judge things – be they creature, human or centaur – by appearances. Instead, Keely understands that the world is full of different kinds of beings. What I adore the most about Keeley is her dedication to family, even the ones who wronged her.


THE BLACKSMITH QUEEN is book one in G.A. Aiken’s fantasy-romance series, THE SCARRED EARTH SAGA. This story is a true delight. It actually reminded me of my role-playing days. Keeley’s interaction with her sister Gemma made me think of the goofy, fun antics my role play partner and I did. I love this author’s centaurs. They really stand apart from centaurs in movies and fantasy genre books.

My only nitpick with the story is the characters’ vocabulary. Some words, especially insults, felt too modern. They did not feel as if they belonged in a fantasy setting.

Also, the ending felt like it dragged a bit. I would have liked it better if Keeley met the dwarves in one book, and then the elves and barbarians in separate books. It would have made the tale and Keeley’s growth better.

Overall, I really did enjoy the book (enough that I recommended the book to my former role playing partner). I cannot wait for the next installment in this series!


Posted by Raonaid Luckwell at 10:48 PM No comments:

PRISONER OF THE CROWN review

Imperial Princess Jenna is the firstborn daughter of Emperor Einarr Konyngrr and his first wife Hulda. She has spent the majority of her life sequestered behind a seraglio’s gilded walls. Jenna diligently prepares for the day she leaves the seraglio and marries the man her parents had chosen. However, her betrothed is not what she expected. Can Jenna endure her husband’s mistreatment long enough to escape? Or will he be her doom?


I have been curious about Jenna’s story since her part in THE EDGE OF THE BLADE, book two in THE UNCHARTED REALMS. She is such a remarkable heroine, who demonstrates such growth towards the end of the story. I adore how Jenna uses her abuse to counsel her impressionable younger brother to treat women better. But, what I admire the most about Jenna is the sacrifices she willingly makes to keep her sisters from sharing her fate.


PRISONER OF THE CROWN is book one in Jeffe Kennedy’s fantasy series, THE CHRONICLES OF DASNARIA, another spinoff from her THE TWELVE KINGDOM books. The story surprised me. I expected a fantasy romance like the author’s prior books; however, this story has absolutely no romance in it. It does touch on violent triggers, especially domestic abuse against women. I like how the author delves into Dasnaria patriarchy culture and seraglios’ politics.


I already fell in love with Harlan, the hero from THE TALON OF THE HAWK, book one in THE TWELVE KINGDOMS series. His steadfast determination to help Jenna made me love him even more. However, I wish I could say the same about Kral, the hero from THE EDGE OF THE BLADE, book two in THE UNCHARTED REALMS. I am glad that he changed from this story to his.


PRISONER OF THE CROWN is a heartrending tale of a princess’s harrowing journey to escape her sheltered and privileged existence. I like how the entire story is written in Jenna’s perspective. I cannot wait to read the continuation of her future journeys.
Posted by Raonaid Luckwell at 1:13 PM No comments:

Go check it out! And the prizes!

Posted by Raonaid Luckwell at 10:03 AM No comments:

Devil and the Deep by Julie Ann Walker Review

REVIEW:
Madison “Maddy” Powers is an oil heiress, her father owns Powers Petroleum, US’s largest oil company. She orchestrates an outing on a remote island for three teenage scholarship applicants in order to be closer to Bran. Much to her chagrin, Maddy finds herself and her three charges at gunpoint. When Bran comes to their rescue, she decides a compromise: one night then they can resume their friendship status.
Brando “Bran” Pallidino is an ex-Navy Seal. He now works at Deep Six Salvage with his Seal comrades. Bran tries to keep an emotional distance from Maddy Powers, but he comes to her rescue yet again from unidentifiable threats. The threat keeps dogging their every steps forcing Bran to protect her from the men intent on kidnapping her.
I could not help but empathize with Bran. His childhood scarred him, and he carries the fear, allowing it from keeping Bran from forming any attachment to women. I love his banter with Maddy, but what I enjoyed the most is his discomfort around the three naughty teenagers.
Maddy is an easy heroine to like and enjoy. She has been through a terrible ordeal, and Bran, in his way, helps her deal with the mental trauma. I like her snarkiness and her determination not to give up on what she wants.
I especially like that Julie Anne Walker sows the possible start for Madison and Alex – or it is simply wishful thinking. I so want those two to be a couple. So I cannot wait for book three and hope
The other thing I like about DEVIL AND THE DEEP, the entire book takes place in the span of a day and a half.
Posted by Raonaid Luckwell at 10:25 PM No comments: